Some of the first DSP processors were introduced back in the early 80’s, but were expensive, power-hungry devices that required external memory, had limited arithmetic precision, and used low clock rates by today’s standards.  Although these devices could implement crossovers and signal routing, delays and other DSP functions, the cost, design complexity and limited precision made them impractical for building active speakers.  The first real devices that made sense for embedding in active speakers didn’t arrive until around 2000, when mixed-mode chip technology started to flourish.  Mixed-mode IC’s allowed having analog and digital circuitry on the same die, and some vendors even offered class D power amplifiers in the same package.  This integration of multiple stages of the audio processing path resulted in a cost effective “system-on-a-chip” (SoC) that was ideal for active speakers.

One of the first audio SoC’s was the TAS300X series.  The block diagram of the TAS3004 was used as an example in Article 2, and this author actually made about 3 different active speaker systems based on that chip.  The picture below shows a 2-way plate amp using the TAS3004 and a pair of class-D amps. 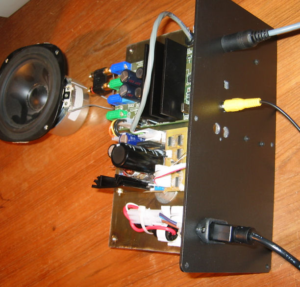 Another important step in audio DSP’s for active speakers were the Apogee devices that were designed around 2000 and released in 2001 – 2004.  The DDXi-2051 integrated a small DSP core with class D power amplifiers, and newer versions of these chips are still being produced by ST (STA328).  The block diagram, shown below, includes 4 biquads for each channel in the block labeled “Audio EQ”, and that provides enough filters to implement steep crossovers, if the user so desired.

A prototype miniature plate amp based on the STA328 is show below: 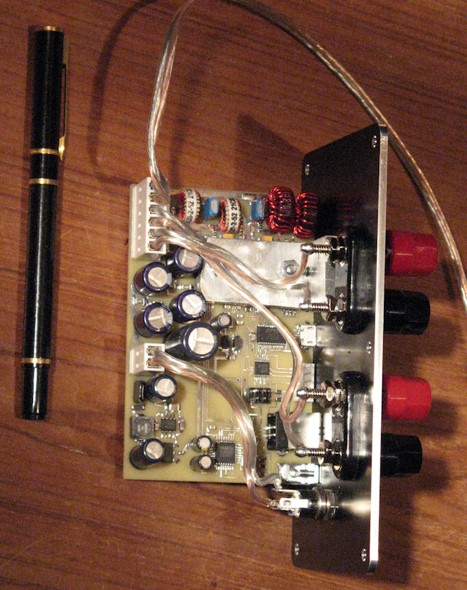 All of these early chips used a fixed architecture, where resources like the biquads and multiplexers and delay occupied fixed addresses, and the user wrote the coefficients, volume level or routing codes directly to those addresses.  But as these chips became more powerful with a greater number of processing resources, this fixed architecture became increasing unwieldy.  The block diagram for the TAS5518, which provides DSP and class D modulators for 8 channels, shows how this fixed architecture is starting to be too complex for the programmer who has to keep track of every one of those processing blocks and the values that get loaded into them: 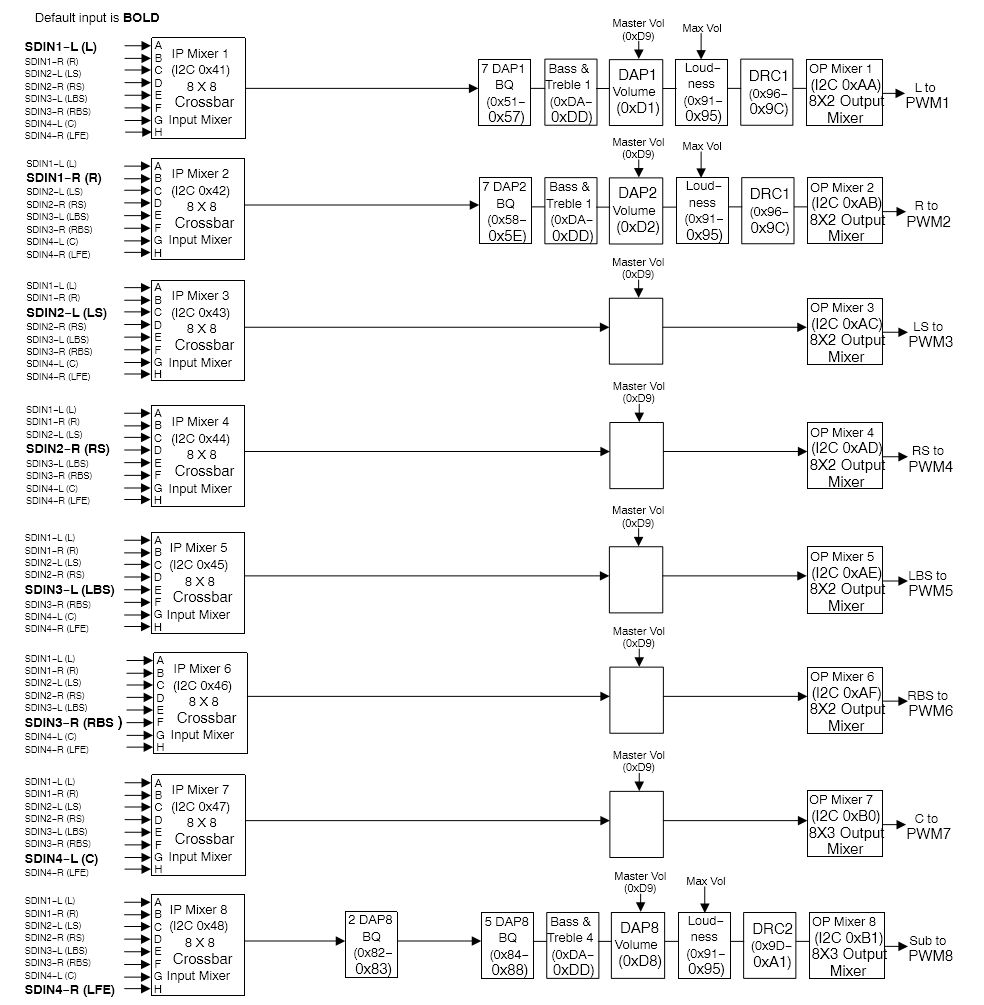 So starting around 2008 or so, the two major audio DSP vendors — Texas Instruments (TI) and Analog Devices (ADI), transitioned to a new way to define the DSP architecture.  This new approach provided a graphical user interface that allowed the designer to select DSP blocks from a “toolbox” and connect them by drawing lines on the screen.  The Analog Devices graphical tool is called SigmaStudio, and the TI graphical tool is called the PurePath Studio Development Environment.  A screenshot of the ADI SigmaStudio is shown below: 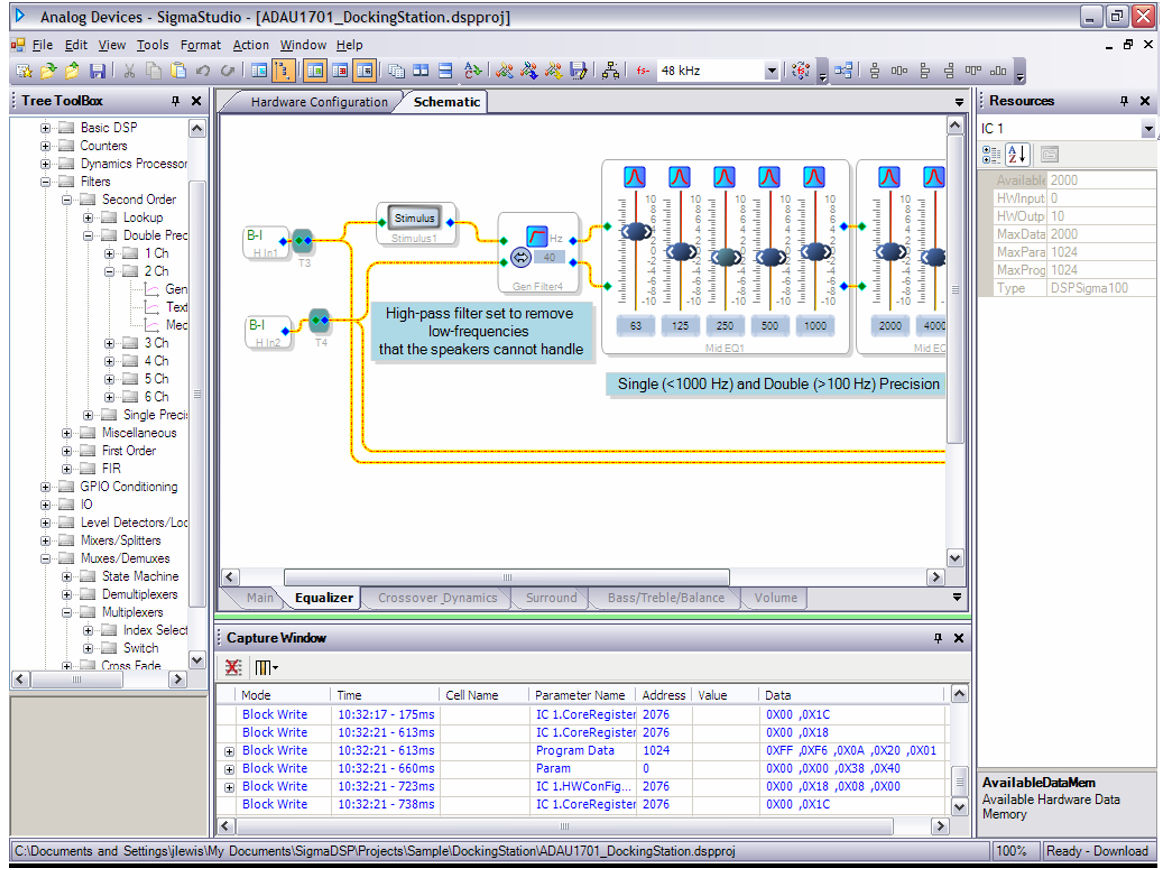 Once the DSP block are “wired up”, the compiler analyzes the block diagram and compiles code for the DSP.  By using long instruction words (for example, the instruction words on the ADAU1701 DSP are 40-bits long), the compiler is able to specify all of the data sources and destination addresses for each operation and ensure that the ALU is always busy working on data.

In the last 5 years, there have been a number of new and more capable DSP processors that keep increasing the processing speed and adding more features.  For example, the ADAU1452, released in 2014, has 6 times the speed of the ADAU1701, which was introduced in 2008.  Although you won’t need this additional speed for designing simple crossovers, the extra processing power can be put to good use for higher sampling rate and for implementing some of the more advanced algorithms.  For example, the basic biquad requires only 5 clock cycles, but the “pitch bend” algorithm requires 112 clock cycles.

Another area where the devices have become more capable is increased numerical precision.  For example, the ADAU1701 uses a 56-bit ALU, whereas the ADAU1452 has increased the ALU precision to 80-bits.  This precision is desirable for low-frequency filters, as the coefficients for low frequency filters include a lot of place-holders rather than significant digits, and if there is insufficient resolution the filter will introduce noise.  The rule of thumb used several years ago was that a 200Hz filter should provide at least 24 bits of resolution for the coefficients and at least 48 bits for the ALU.  Lower frequency filters will require more than 24 bits for the coefficient to ensure that minimal noise is introduced.  I haven’t seen a more recent rule of thumb applying to lower frequencies, but it’s probably safe to conclude that 80 bits is sufficient for any audio application.

Another evolution in the last 5 years has been in the analog subsections.  The analog noise, distortion and dynamic range levels have improved considerably, to the point where it is not necessary to use separate A/D or DAC chips to achieve audiophile quality.

Audio DSP chips to consider (or not consider)

One of the goals of this article was to identify and compare various DSP devices suitable for implementing active speakers.  So we are looking for devices that provide enough DSP processing power to implement crossovers and many channels of EQ.  We also would like to see integrated A/D and DAC’s, integrated amplifiers or at least the class D modulators, and we would want to have enough precision to implement low frequency filters with minimal noise.  Unfortunately, there are so many differences between these options that a side-by-side comparison is impractical, so we’ll look at some of the DSP chip families and discuss their potential individually.

These chips were early TI products that offered exciting new possibilities for active speaker when they were first introduced, but they are all obsolete now and not recommended.  The biggest weakness of those first-generation mixed-signal chips such as the TAS3004 was the analog subsystem.  When you compared the sound between the digital input and the internal A/D converter, the quality difference was immediately obvious.  The TAS3103 was a great improvement on the TAS3004, with more computing resources, a 72-bit accumulator, a 3D effects processor, and it removed the internal A/D and DAC.  Ground Sound used this DSP in a series of excellent high-end active speakers that now appear to be discontinued.  These early devices are still impressive, but they shouldn’t be considered for new projects.

ST was the foundry for the break-through Apogee amps, and they have continued to offer variations of those original designs.  The STA328 variants provide 4 biquads per channel, which is enough for a steep crossover and some EQ and that device also has a high quality class D amp that can output up to 100W or so.  These chips are still viable options for smaller active speakers.  However, the 28-bit precision, with 24-bit coefficients, is a limitation.  In newer variations of the chips, ST has provided an additional stage in the biquad filters to reduce noise for low frequency filters.

The STA308a is an 8-channel DSP/class D modulator that was used in the popular Panasonic SX series of digital receivers, which was well received by the audiophile community.  With 8 biquads per channel and 8 channels to work with, it is still an attractive audio DSP chip for building active speakers.  ST has been releasing new variants under the FFX moniker, and they have the benefit of using many of the same control registers and numeric formats of the earlier chips, which allows reusing software from the older designs.  The Active Speaker Design (ASD) program provides full support for these chips (it also supports the TAS3004).

The Analog Devices ADAU1953 was an exciting IC for active speakers designers when it was introduced, as it supported 3-way designs, by providing a 3rd channel with analog output that could be used for the woofer in a 3-way or the sub for a 2.1 system.  It provided 7 biquads per channel using a fixed architecture and it was accompanied by the SigmaStudio design tool to simplify the design process.  But a short time later, the ADAU1401 was released, along with the commercial temperature range version, the ADAU1701.  The ADAU1701 is fully programmable, features a higher resolution 56-bit ALU, and provides 4 analog outputs with 2 analog inputs.  The chip also supports 3 additional I2S streams and 2 additional I2S outputs, so it can be used as an 8-channel device.

The ADUA1701 caught on quickly in the DIY community when miniDSP used it in their initial 2X4 product, and it is also used in the basic freeDSP board.  You can also download a board design from this website based on the ADAU1701:  it is the design used in the DSP test bed that is described in this link.  ADI initially limited the availability of SigmaStudio to the engineering design community, but eventually allowed anyone to download the software.  Given the wide DIY community interest in the ADAU1701, this is the product that will be discussed in more detail in these articles and that will be used in the case studies.

A more recent version of the ADAU1701, targeted for high-end digital audio applications, is the ADAU1450/1/2.  There are several variants of the chip which provide different types of digital audio interfaces.  This device does not provide on-chip A/D or DAC’s, but it provides about 6 times the throughput of the ADAU1701 and it features a full 80-bit ALU with 32-bit coefficients.  This product is an excellent choice for high-end active speakers.

TI has a fairly large portfolio of medium-powered class D amplifiers with integrated DSP.   The older devices, such as the TAS5706B, use a fixed-architecture DSP core, usually with 7 biquads per channel.  The newer devices, such as the TAS5756M, use a “miniDSP” core that is programmed using the TI PurePath Studio software (note:  the “miniDSP” core has nothing to do with miniDSP, the company–it is simply the term TI has been using for years to describe their programmable DSP devices).  These newer devices feature lower distortion than the original series and would be an excellent choice for building small active speakers.  They don’t include the A/D converter on board the amplifier chip, but usually there is some selection logic in the circuit to accommodate SPDIF audio that can provide the digital audio.

One of the issues that makes these TI amp chips less attractive to the DIY community is that TI typically restricts the software availability to engineers with a recognized email address.  So it might be difficult for hobbyists to download a copy of PurePath Studio.  Fortunately, TI recognizes audiodevelopers.com 🙂

TI CODEC’s with a mini-DSP core

TI has a very large selection of CODEC’s and other audio converters that contain a DSP core that can be used for active crossovers and EQ.  Many of these are intended for portable equipment where power consumption is an important consideration, and are not as high resolution as we would like to see for active speakers.  But a device like the PCM3070 features high quality A/D and DAC’s and extensive DSP resources, as shown in the diagram below.  It could be very useful as the heart of an active speaker, as you would simply need to add some low-cost power amps to a small board with the PCM3070: 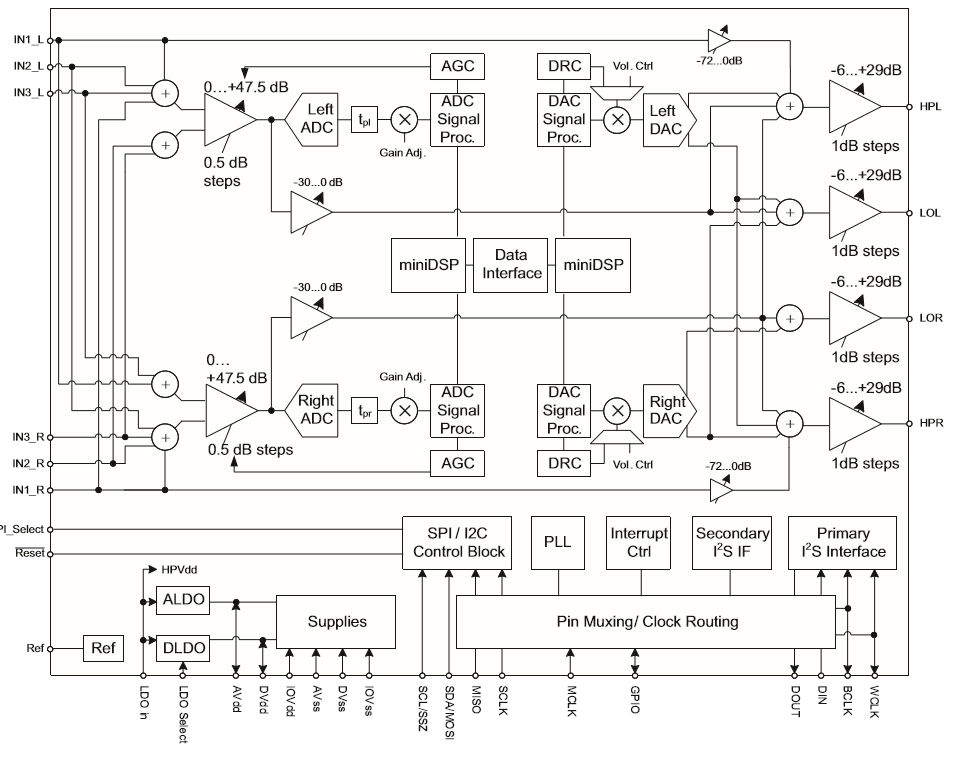 Other devices to consider

The most commonly used class D amps with integrated DSP are made by Neofidelity.  These chips are usually found in Samsung and other Korean-made LCD television sets, and they are probably in many soundbars.  The Neofidelity NTP-8230 is a 2.1 amplifier that can provide up to 30W per channel, and it has 25 biquads.  That’s a great combination for making small active speakers.  However, you will probably not be able to buy fewer than 1000 at a time, and getting documentation in English might be a problem.

Other devices that would make nice active speakers keep popping up or going out of business.  The Cirrus CS4525 looked like a great alternative up until Cirrus pulled the plug on the product about 2 years ago.  The Rohm BM5449MWV is also an interesting product, with a pair of 25W amps and integrated DSP for $6 in single quantities.  Digikey is showing about 1500 in stock, so it is a real product.